My 3D and Stereoscopic Photography
A 1950's stereo camera
Previous
Next

At the Stereoscopic Society Annual Convention 2015 at Canterbury I was lucky to acquire this 1950's stereo 3D camera. 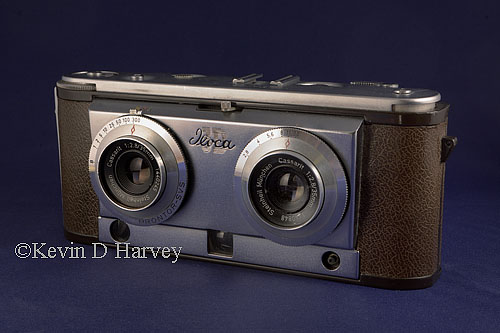 The camera was made in the former West Germany between 1956 and 1959. Luckily it uses standard 35mm film. Initial films have produced encouraging results although I have realised that due to the smaller frame size and non standard image spacing on the film it is advantageous to process my own films. (A commercial processing house cut through some of the frames). This has led me to dig out my old monochrome film processing equipment where I have re-discovered how satisfying developing a film is. The camera itself is completely manual ensuring that the image making experience is 100% hands on even to the extent of using a separate hand held light meter.
Next
Previous