I sourced a small flash/sliderail from the Internet and using my Nikon P50 compact camera I undertook my first experiments. I acquired another camera of the same model which I also mounted on the sliderail to create my first stereo camera. Initially I planned to concentrate solely on stereocards and therefore mounted the cameras in portrait mode. 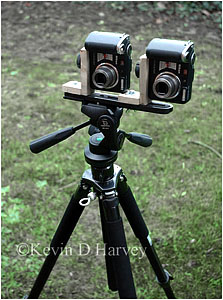 This is the dual Nikon P50 stereo camera mounted on a tripod. To avoid camera shake and fully utilise the quality offered by using a tripod I fired the shutters by using the self timer counter on each camera. This meant they were not synchronised so this arrangement was only useful for static subjects. The camera was actually quite successful and was fun to use. Unfortunately one of the Nikons eventually failed which spelt the end of this my first dedicated stereo image maker.
Next
Previous